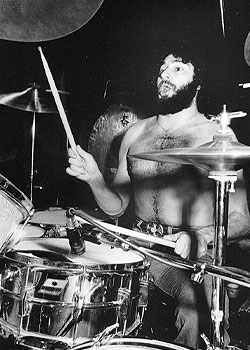 Sib's real name is John. He's been playing drums since he was in elementary school (he's never been formally taught). He played in various bands along with Fran Sheehan and eventually landed a spot in Boston, replacing original drummer Jim Masdea.

Sib was involved in Barry's solo project in 1980 and worked on some of the early sessions of Third Stage before being replaced by Jim Masdea. Sib sued Tom, but later settled out of court. Sib has owned operated a record store in Danvers, MA called Soundwaves. He also owned a chain of tanning salons around the Boston area. He currently runs a music store in Sommerville, MA called Holland Street Music. Sib used to have his own website at sibhashian.com, but it''s no longer online.

Sib was also the drummer for Ernie and the Automatics, which includes former Boston bandmate Barry Goudreau.