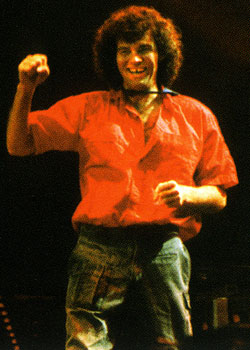 Growing up in Jamaica Plain, Massachusetts, near Boston's inner city, Jim Masdea lived in a house that shook with the rumble of passing commuter trains. Dealing with the drama of urban survival, no one would have predicted that someday he would be close friends with MIT grad Tom Scholz, who had had the luxury of a good home and successful, educated parents.

Self taught and immersed in Rock and Roll music at an early age, Jim was happy playing drums in capable local rock bands by the time he started high school. When Jim serendipitously answered an ad for a band that Barry Goudreau and Tom Scholz were playing in, the stage was set for a relationship that would eventually change all of their lives. That band quickly dissolved, but the musical connection turned into a close friendship between Scholz and Masdea.

Jim was the drummer for several unsuccessful attempts at bands formed to play songs live, and even more attempts at recording them in Scholz's commercial studio. When Tom gave up on these approaches and went 'underground' to his basement studio, he invited Jim to be the only other musician he would work with. Masdea played the drums on every demo recorded by Scholz, and together they developed the drum arrangements for most of the music heard on BOSTON's debut album.

At the insistence of management, Masdea was eventually replaced for the recording of the debut album tracks, but the drum parts for many of the songs were reproduced note for note from the demo tracks that Jim played. At Scholz's insistence, Jim played drums for 'Rock and Roll Band' on that album, and several years later Tom invited him back to record drums for much of BOSTON's Third Stage, and the amazing 1987 stadium tours that followed. In addition to playing with BOSTON, Jim has been involved in diverse enterprises, including building and operating a bakery, and captaining a commercial yacht.