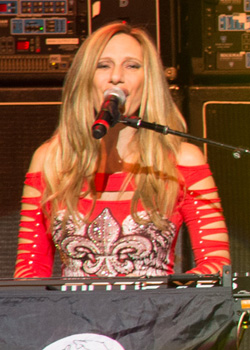 A Long Island, NY native, Beth Cohen grew up in a house filled with music. Although she played both piano and flute by the time she was 10, she soon discovered that singing was what really inspired her, and began writing her own songs as a young teen. Attending the University of Miami on full scholarship, she earned her degree in music and honed her craft as a vocalist as her influences broadened.

Performing at various venues, Beth sang rock, R & B and Latin material, and began incorporating Spanish into her music. Her talents caught the attention of Jon Secada, and soon after, she toured as one of his background vocalists. In addition to being a successful writer, she has traveled the world doing what she loves, and has worked with artists such as Julio Iglesias, Barbra Streisand, Tina Turner, Rod Stewart, Pink, and most recently, Barry Gibb, where she was also featured as a solo vocalist on his tour.

Tom Scholz happened to see Cohen perform at a club in Miami in the late ‘90s, while he was working on some studio recordings, and was so impressed with her incredible voice that he asked her to try some vocals on some songs that he was developing. He recalls, "Lots of people have a great voice, what was amazing about her is her ability to use it." Beth sang on demo tracks for "You Gave Up on Love," and her background vocals appear on that song on 2012's Life, Love & Hope, an earlier version was released on 2002's Corporate America. Scholz says, "She's the best studio singer that I've ever worked with." An accomplished jazz pianist, Beth will lend her keyboard skills, some rhythm guitar, and of course her exceptional vocals as she joins BOSTON's lineup this year as they bring their live show across North America. Gary Pihl says, "I'd seen some YouTube videos of Beth singing all kinds of stuff, but when I heard her sing lead on our song, "Surrender," I knew right away that she was gonna be great on stage with us."

When not touring, Beth is a top vocal coach in Miami, working both with well-known artists, as well as young, hungry emerging performers. She says, "It's a wonderful way to help singers live the dream I get to live every day."

For more information, go to: beth-cohen.com