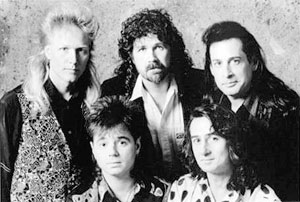 RTZ, which stands for Return To Zero, began as collaboration between Brad Delp and Barry Goudreau around 1989.

Goudreau and Delp were both part of the original Boston line up, and after Barry's departure from Boston the two stayed in close contact with Brad contributing both to Barry Goudreau's solo album and also to a lesser degree on the Orion the Hunter album.

Around 1989 Delp was on hiatus from Boston and looking to get active in writing again. He contacted Goudreau about collaboration. Goudreau and Delp brought in keyboardist Brian Maes who was part of the Orion the Hunter touring band, drummer Dave Stefanelli and bass player Tim Archibald. Maes and Stefanelli had previously worked with producer Nick Lowe in England and Archibald's band New Man had released an album on Epic.

Delp and Goudreau landed a deal with Giant Records and the first RTZ album, titled Return to Zero was released in 1991. A video was produced for the first single Face The Music. The band soon hit the road, Delp gave Boston his notice and they felt that the sky was the limit.

After touring the US extensively, a video was prepared for the single Until Your Love Comes Back Around penned by keyboard player Brian Maes originally for ex. J. Giles singer Peter Wolf. The single was very successful and reached No. 1 in several markets.

RTZ felt that the band wasn't getting the attention it deserved by the label and asked to be released from their contract. As RTZ began to shop for a new label, Delp decided to leave to the band and would eventually reunite with Boston. The other band members decided that it would be impossible to replace Delp and decided to end the band. Unfortunately, Return To Zero went out of print, and therefore is no longer available in stores.

There were still enough recordings left over from the original recording sessions to create another album. Barry searched for a new label and eventually found MTM Records. The recordings were released on September 28, 1998, and the album was titled Lost.

In 2004, Lost and Found was released. It features previously unreleased music from the band. In 2005, RTZ released 2 CDs simultaneously, Lost in America and Found in America under band member Brian Maes' Briola Records label. Lost in America contains all the same material that was released on Lost, including the song Dangerous, which was only available on the Japanese release. Found in America contains the same material that is on their 2004 release Lost and Found, but includes a bonus live version of the song Return to Zero.

Music Video: Until Your Love Comes Back Around