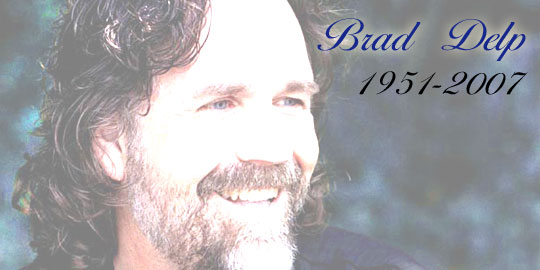 The band Boston suffered a major loss on March 09, 2007 when Boston vocalist Brad Delp was found dead in his home.

His death was untimely and took everyone by surprise -- after all, he was a long-time vegetarian and seemed very healthy, it wasn't until a few days later that the cause of death was released...

The cause of death was revealed to be a result of carbon monoxide poisioning. According to reports, Brad was found after his fiancee Pamela Sullivan called police after noticing a dryer vent tube connected to Brad's car in the garage. On the door leading into the house was a note which said "To whoever finds this I have hopefully committed suicide. Plan B was to asphyxiate myself in my car." In another note, Brad said "I take complete and sole responsibility for my present situation. I have lost my desire to live," Brad also left instructions on how to contact Pamela as well Brad asked to make sure his cat Floppy was safe as he left her in a room that was safe from the carbon monoxide. There was also a note on a door at the top of the stairs warining that there was carbon monoxide inside.

Inside the bathroom, Brad was found on the floor with his head on a pillow, two charcoal grills and a note paper-clipped to his shirt that read "Mr. Brad Delp. J'ai une ame solitaire. I am a lonely soul."  Apparently, Brad had been depressed for some time, according to reports of what Pamela told police.

Brad had planned to marry his fiancee Pamela during the summer of 2007 while Boston was planning a summer tour.

Brad will be missed by many.

As you might have heard, Brad Delp, the man whose voice launched a thousand ships loaded with Boston's unmistakable Rock Anthems passed away yesterday at the all too early age of 55. We were all deeply saddened by this news and had been looking forward to seeing and hearing him in concert this summer. While there are few details, the simple words of his passing are enough to let us know that his place in the band of angels is confirmed.

We will all miss him. He was THE most unaffected superstar vocalist I ever personally had the opportunity to meet and spend a little time with. He was naturally gifted and we will always be able to enjoy his earthly contributions to the soundtracks of our younger days whenever the spirit moves us by slipping in the Boston CD of our choice.

Our sympathy goes out to his family, band mates, friends and to all Boston fans world-wide who most certainly share our feelings today.

Kevin Cronin (REO Speedwagon):
"I WAS ON A BREAK FROM REHEARSALS FOR OUR UPCOMING SUMMER TOUR WITH BOSTON, WHEN I GOT THE SHOCKING NEWS ABOUT BRAD DELP. I KNEW BRAD AS A FRIENDLY, DOWN TO EARTH, LIKABLE GUY, AS WELL AS A HIGHLY GIFTED LEAD SINGER. I DON'T KNOW EXACTLY HOW IT WORKS, BUT I BELIEVE THAT AFTER WE DIE, WE ARE SOMEHOW REUNITED WITH THOSE WHO WE LOVE. MY PRAYERS ARE WITH BRAD, HIS FAMILY AND HIS BAND MATES. I FEEL VERY SAD RIGHT NOW."

Geezer Butler (Black Sabbath)
"I was very saddened today when I heard the news of Brad Delp's passing away. We had the pleasure of touring with BOSTON in the late 1970s, and they were one of the few guest acts that I used to watch every night, before SABBATH took to the stage. A nicer bunch of people would be impossible to find, and a fantastic band and debut album, which still sounds as good today as it did then. What an incredible singer Brad was — one of the all-time greatest voices. He will be greatly missed."

Joe Perry (Aerosmith)
"The few times I did meet him, he was very down-to-earth and seemed like a great guy, without any of the ego baggage. He had one incredible, amazing set of pipes. He is going to be sorely missed in this city [Boston] and the music-loving world."

Keith Emerson
I've been fortunate to have worked with a lot of perfectionists in music, but Brad outshone most of them. We worked together when I was writing the score to a Lorimar film “Best Revenge” and Brad sang the main title theme. His vocal range seemed limitless as did his friendliness.

My condolences to his band, his lady and family- and everyone that loved him.