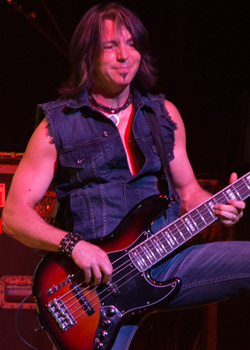 Bassist Tracy Ferrie is a long time veteran of the road as well as an accomplished session player. Although he is most widely known as a member of the band Stryper his credits precede and stylistically exceed his experiences there. Tracy's support role approach has paved the way to his working with many notable bands and artists such as Stryper, Plumb, Sonic Flood, Rebecca St. James, Michael Sweet, Kimberly Locke (AI), Danielle Bollinger, Kristy Starling, Greg Long (Avalon), April McLean, Jeff Deyo, Guardian, and Whitecross. During his time in L A , Nashville, and Boston, his session experiences have allowed him the opportunity of working along side some of the worlds most talented and influential musicians including drummer Kenny Arnoff, pedal steel Legend John Hughley, guitarist Phil Keagy, Paul Moak, keyboardist Steve Hornbeak (Faith Hill), producer Jay Joyce and many others. Having a good balance of studio precision with a live attitude, Tracy earned the EMG 25Th Anniversary players award and a spot on the commemorative CD next to Robert Trujillo (Ozzy). In addition Ferrie has played and written for several Dove and Grammy winning artists/recordings.

Tracy grew up in N. Indiana where he was encouraged by his school band director to learn music and eventually go on to study at Berklee College of Music, Music Production and Engineering Dept. Throughout grade school Tracy played tuba, guitar, upright, percussion, and finally electric bass at the request of the director. It was the electric bass he took to Berklee and was soon in demand for session work. These calls to play both live and in the studio were what sparked his desire to pursue a career as a professional musician.

After two and a half years at Berklee, Tracy was jumped and badly beaten in a town outside of Boston. Needing hospitalization and multiple surgeries, his Boston days were over. Tracy spent the next several months in Indiana recovering and eventually heading west to Hollywood enrolling at Musicians Institute. There in L A he quickly got involved recording sessions, playing the "Sunset Strip" circuit with bands and performing in videos some of which were featured on Music Television. One of the bands, Electrik, became his first touring act across the south west.

Tracy's first break was a call from Dez Dickerson (Prince) to audition for a christian rock band Whitecross. Tracy ended up writing, playing and recording for a different band from the same label named Seraiah. After relocating to Nashville he joined Whitecross for two recordings and world tours. Following this experience Tracy has spanned the globe having played in twenty five countries, performed on domestic and international television shows. He has recording credits for various movie and TV soundtracks such as, A View from the Top, Felicity and Tarzan. One of his most memorable experiences was playing for Pope John Paul II with Rebecca St. James in 2000. For a complete list of tours, discography and producer credits visit the music page @ tracyferrie.com

Currently Tracy is working as a session player, teaching guitar/ bass and regularly playing live for various bands/artists. His versatile style is culmination of tastes and experiences ranging from blues, funk, r&b, rock, punk to light jazz, gospel and country.

If you are interested in using Tracy he puts heart and soul into every project striving for complete satisfaction, willing to do what it takes to get there.