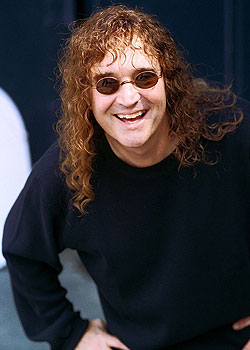 In the early '90's when Tom Scholz was ready to lay down vocal tracks for Walk On, Brad Delp was not available for the project, so Fran Cosmo stepped up to the plate, or the mic in this case, and started his journey with BOSTON. Tom says, "Fran has a really good ear for recorded and live sound." Fran sang most of the vocals on that album, and has toured with the band in 1995, 1997, 2003 and 2004, trading off vocals with Brad. Cosmo also sang with Delp on "Higher Power," off of 1997's Greatest Hits, and several songs on Corporate America. Scholz remembers, "Fran was fun to play with on stage after Walk On was released, he was a second voice that could sing harmony with Brad and a capable guitar player." Jeff Neal says, "As if one phenomenal vocalist in the band weren't enough, Fran is an amazing talent in his own right... and a seasoned pro. I really enjoy playing with him on stage. There are a lot of moments in the show where we feed off each other's energy. Behind the scenes, he completely keeps me in stitches with his antics and sense of humor, which is much appreciated considering the stress that naturally exists dealing with life on the road. Not only is he a great singer and musician, but just a great guy to hang with."

Gary Pihl describes him this way, "Fran's an easy going guy with a big heart. Nothing seems more important to him than family and friends. A great guy to have on your side, or in your band! He was born with such musical instinct. You can't learn it. You can't teach it, he's just got it. But Fran is one of those guys who is never happy with their performance. He always wants to make it better. He'll have an incredible night, the crowd is jumping up and down for him and he'll turn to us and worry, "Did I sound OK?" Fran doesn't have a technical background but if he says he's hearing something wrong with a speaker on the other side of the stage, we go check it out. He's got super hearing. Dogs ask him, 'Did you hear something?'"

Prior to BOSTON, Fran had been in several bands, one being Orion the Hunter . Currently, Fran is touring and recording with Cosmo , a band he created with his son Anthony. Fran lives in Upstate New York with his wife and daughter. For more information, check out their website at www.myspace.com/cosmotheband