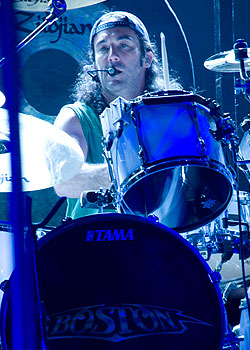 After an extensive search for a new drummer for BOSTON, Tom Scholz happened to see Jeff Neal performing with his band Punchbug at a ski resort in Maine, and the rest is history. Jeff joined the group in 2002, adding his energetic, entertaining style of drumming to the '03 and '04 tours, and excellent harmony vocal chops. Gary Pihl thinks very highly of him, saying, "Jeff is great to have in the band because he is so down to earth and matter of fact. He's a great drummer and remarkable singer, but acts as if what he does is just like anybody else trying to do his job the best he can. We're fortunate to have him, and I'm glad that even after a million people have told him how great he is, he hasn't changed from being that good-natured guy, always ready to work." Tom concurs, adding, "He fits in because he's like the rest of us...he's not a rock star, he's a regular guy who can really play. He's involved in music because he loves it, not because he makes a living from it."

When not on tour with BOSTON, Jeff's "other" job is teaching U.S. History and Sociology at a local high school in his native Maine, where he lives with his wife. He's also the Varsity soccer coach, and is an avid player himself. However, music is his first passion, and he has played drums in local clubs for the past 20 years, where an audience of 175 would constitute a "huge night." How did he make the shift from playing bars to full-blown concerts? In his words, "The way I handle it, is I do as much preparation as possible, mentally and physically, just focusing on the task at hand, without thinking about the enormity of what I'm doing. You can start to kind of wig out on that. One can easily get overwhelmed if you worry about the extraneous things. I try to stay focused on playing my parts to the best of my ability, and that allows me to make the transition. The preparation is key. It is kind of an awe-inspiring thing, now to share the stage with idols of mine. From the beginning, everyone in the band was great, making me feel at ease. It's a huge plus to have people realize what you might be going through, and say the right things to pick you up. It relieves a lot of pressure, and you can focus on doing what you need to do." He adds, "The reality is that people are coming to see you whether it's 25 or 25,000, and it's important to give a good performance regardless."

Jeff is a self-taught drummer, an impressive fact, given how far he has made it. "I came from a middle class family, and the logistics of drum lessons were not an option. I had to break into my piggy bank and basically buy a drum set myself from the neighbors down the street who were having a garage sale. All the neighborhood kids were ogling over it. I had to beg my parents, and eventually they succumbed, knowing I wasn't going to give up on it. Ever since they have been wonderfully supportive, they've encouraged it all along when they realized I was serious about it, from garage bands to gigging out, they helped me acquire gear over the years," he remembers, adding, "I really have to give kudos to my mom on this, she made a lot of personal sacrifices for me. At one point, I really needed a pair of high hats, but it just wasn't possible at the time. One day I came home from a particularly bad day at school, and there was a brand new pair of Zildjian high hats sitting on the table waiting for me. She had gone into the music store, knowing nothing about drums, but determined to get those for me, even though she was financially strapped herself."

Nealie, as he is affectionately known to the band, loves the great outdoors, and spends as much time as possible biking, hiking, camping and kayaking. A new acquisition to the family, a bearded Collie pup will also be tagging along on future outings. "He'll be in the kayak before summer's out," according to Jeff. When he's not banging away on the drums, he dabbles in alto sax, an instrument that he started playing at the age of 10. "I don't consider myself proficient, but that's where I learned basic music theory." In the last year or so, he picked up the guitar, even just for sitting around a campfire and playing a few ditties. "The drums are definitely my passion. I just want to keep getting better."