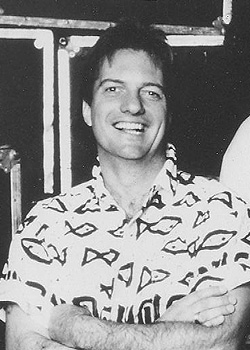 Doug lived in northern California and started playing with the drums when he was 14. School-buddy guitar players made up his "formal training" as they played weddings and private parties. Just out of high school, Doug started a band with some players he knew were serious. They called themselves "A Euphonious Wail", wrote their own songs, and secured a record deal with MCA Records. They released their first album in 1973 and toured as the opening act for Black Sabbath, Bloodrock, and Steppenwolf. Before they started their second album, their guitar player decided rock and roll life wasn't for him and he quit. "We offered the job to a guitar/vocalist guy named Sammy Hagar, but he didn't want to play guitar anymore, he just wanted to sing, so we sent him packin'!! Too bad... he really missed an opportunity there!" It was around that time that Gary Pihl noticed what a great singing drummer Doug was. Gary tried to get Doug to consider being front man for his band Crossfire. They also tried to hire Sammy Hagar but Sammy had put his own band together by then.

In 1975, Doug landed a gig with a guy making a comeback by the name of Link Wray. He'd had a single back in 1957 called "Rumble" in which he introduced the "power chord" to rock music. "Although the gig lasted only six months, it was an honor to work with a living legend."
From 1976 to 1982, Doug worked with "Pacific Coast Highway", another songwriting/touring band playing festivals and small venues up and down the West coast. 1983 found him moving his family to Eureka Springs, Arkansas where he started playing in musical theater. "This was totally different from anything I had done before and it prepared me for a life-changing event... the call to audition for "Boston" !"

"Early in 1987, I got a phone call from Gary Pihl saying that Boston waslooking for a singing drummer to do an up-coming tour and asked if I would consider auditioning! I was told to learn 4 songs verbatim and that a plane ticket would be in the mail for me. I learned the tunes, then packed my autograph book and my camera! Hey, I knew I would never get the gig, but I really wanted to meet the guys from one of my all-time favorite bands !"

"I flew there, I flew back... I flew there again, I flew back. Each time I went, I worked with a different bass player (a position that was open as well). Finally, on my fourth trip, I was there with bassist David Sikes, who I'd auditioned with one time before. When we saw each other, we both thought, "maybe we're the ones!?!" Excitement turned to jubilation when, after a few hours of playing, we were asked to do the tour!"

"The six-month tour turned into years of fun, adventure and friendship with Tom, Brad, Gary, Dave, and a fantastic crew of forty-some-odd guys and gals."

"When we finished the fourth album, "Walk On", in June of 1994, Tom wanted to make some changes in the line-up and I was asked to step down. We're all still friends... no hard feelings. Tom Scholz is a fabulous human being with a vision of how and what he wants the band to be. There have been even more changes in personnel since I left, but that's what makes Boston "contemporary". They're not your typical "classic-rock" band. It was the experience of a lifetime and I miss their smiling mugs! (here's to you, Brad)"

In December of 1995, Doug and some friends started a country music theater in Branson, Missouri. It's a great show with some incredibly talented musicians that continues today. In June of 2005, Doug's parent's declining health prompted Doug and wife, Valerie, to move to Oregon to care for them. Although he lost his parents, Doug stayed on there with Valerie, enjoying each other and the beautiful Southern Oregon coast.