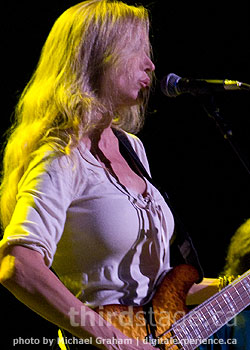 As the first woman to grace the BOSTON lineup, Kimberley Dahme has been a welcome addition since she joined the group in 2001. It was a stroke of luck for the native Californian, who now calls Nashville home. Kimberley sums it up this way, "I was in the right place at the right time. I was playing in another band and Tom Scholz and Gary Pihl were out looking for a new drummer for BOSTON. They happened to see me onstage. I was playing electric guitar and singing in that band. Tom approached me after the show and asked me if I could play bass. I told him that I could learn! I immediately went back to Nashville and bought a bass and called their offices and begged for an audition. I ended up getting the part. I went into deep rehearsal mode for a year. The concerts come as second nature now but they took a great deal of wood-shedding at the beginning." Kimberley's first official appearance with BOSTON (as well as her first time playing bass in public), was on New Year's Day in 2002 at the Fiesta Bowl, where they performed the National Anthem to an audience of over 74,000 and millions of television viewers! Reflecting on that occasion, Kimberley notes, "Longest minute and a half of my life!" Gary Pihl says, "Kimberley's such a hard worker and is really dedicated to making the band sound great. As we were getting ready for the '03 tour (her first with us), she'd come in early and stay late to put in as much time as possible perfecting her chops. She said she'd always loved how expressive the bass lines on the albums are and wanted to nail them note for note."

A big fan of the band from the beginning, Kimberley played in a BOSTON cover band in the 5th grade. It would turn out to be be a vision of things to come for the 6-foot blonde. "I am a huge fan of Tom's music. You can't get better than BOSTON: Tom Scholz and Brad Delp, what an amazing combination! I am very honored to be a part of this band," she says. Born in San Pablo, California, Kimberley grew up in various locations out by the Mojave desert. Dahme has been immersed in music ever since she can remember. "I was in singing lessons before I could even read and could barely even talk," she says. In addition to the bass, Kimberley also plays guitar and flute. Her voice is perhaps her most amazing instrument. Her incredible range really shines, whether she is singing lead or belting out those exquisite harmonies, one of her specialties. She says, "I naturally hear everything in harmony. When a person sings I hear in my head about eight different harmonies." Brad Delp adds, "With Kim, we finally have the girl that we should have had in the first place on vocals to cover some of my parts."

While still in California, Kimberley worked constantly recording radio and television jingles. "The market was so saturated with my voice that they had to start altering it so it would sound like someone else," recalls Kimberley. She has always been athletic, and to this day, still holds the basketball rebound record for her high school. "I got through college with music and sporting scholarships," says Kimberley. As a freshman in college, she was chosen to sing the lead opera vocal backed by a 75-piece choral ensemble that performed A Midsummer's Night Dream on a European tour. Kimberley has always written and performed her own music, and has played with numerous bands over the years. "I also had plenty of random jobs to sustain my music habit," she remembers. It was Tom Hambridge's band that she was performing with when Tom and Gary found her on that fateful night, and she still writes and performs with him on occasion.

This lovely guitarist and vocalist is also a very talented songwriter. Tom Scholz included her song, "With You" on BOSTON's last release, Corporate America. With five solo albums under her belt, she is currently playing at various venues around the country, writing more songs in her spare time, and laying down vocal tracks in Scholz's studio on occasion. Jeff Neal says, "She lights up the room with her personality wherever she goes. Kim is a born performer. Wherever the band goes, people everywhere really seem to relate and respond to her. Along with Brad, she is the one who gets up early in the morning after traveling all night with little sleep to do a radio interview to help promote the band. It ' s a lot to ask of someone on the road, and Kim does it like a trooper." Ms. Dahme is the very proud mother of a 10 year-old son, and a 3 1/2 year-old daughter, who join her on the road from time to time. Somehow, she manages to balance it all, home life and being on the road, a very delicate juggling act indeed. Her fans will attest that she is warm and welcoming to all of them, and has that unique gift of knowing how to make each person feel special. You can tell that she is in her element whether she is on stage, or greeting fans after a show. She says, "When I am on stage, it's as if I'm in my living room and you're my guests. That's the time I throw all my cares away and just play music. I love music, as you can tell. I love performing and people and everything. Bring it on!"