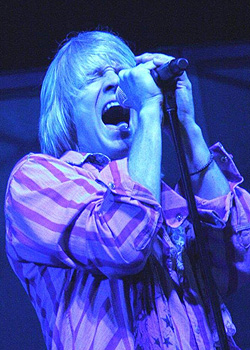 San Francisco Bay Area native vocalist/guitarist David Victor first picked up a guitar at the age of 16 after seeing his sister’s boyfriend strum a few chords. At age 18, David began performing with several original hard rock and cover bands in northern California. After graduating with a degree in Computer Science from California State University in 1989, David financed, wrote, recorded and produced his first commercial release PROOF THROUGH THE NIGHT in 1991. The album was initially released on cassette only and featured primarily uptempo pop-rock originals.

VELOCITY was a dynamic live act that would go on to play numerous shows throughout the western U.S. from 1996 until 2000. As a result of touring as well as U.S. and Canadian commercial rock radio airplay, VELOCITY’s IMPACT and the followup album ACTIVATOR went on to sell well in the U.S., with over 5000 sold in Utah alone where the album received regular airplay on one rebellious rock station K-ROCK. IMPACT sold over 12,000 units worldwide with deals on Europe’s MTM Records and Japan’s AVEX records and continues to sell consistently.

David has most recently been performing with the acts he co-founded PLATINUM ROCKSTARS™ (a multi-artist classic rock show band) and BOSTYX, a tribute to the music of BOSTON and STYX. More information about these bands and others can be found on the Platinum Rockstars Productions website.