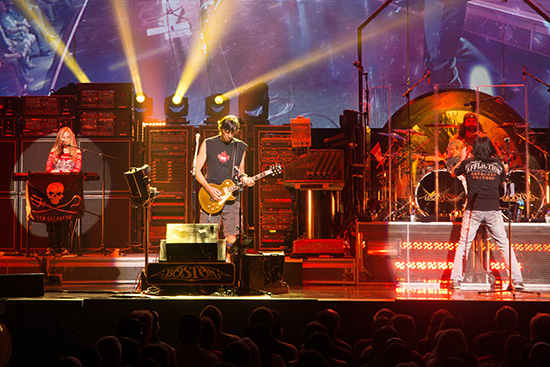 Forty years ago today, February 1st 1976, the amazing story of the iconic band BOSTON officially began when Tom Scholz and Brad Delp signed their recording contract with Epic Records. Their first album, Boston, would quickly become the best selling debut album in history, and its founder Tom Scholz would become recognized for his charitable work, promotion of higher education, and technical innovation.

Back in 1976 no one could have guessed that two unknown writer/performers were about to create albums that would eventually sell over 30 million copies. The phenomenon surprised Scholz as well as the staff of Epic Records, at a time when the industry was caught up in the 70s disco bubble. However, the popular description of the debut album as an overnight success, a "Cinderella story," could not have been farther from the truth.

For six long years Scholz worked as a design engineer for Polaroid during the daytime and then went to work at night in his home studio, writing, recording, engineering, performing - even inventing novel musical equipment - that would eventually bring the "BOSTON" sound to life. But BOSTON almost never saw the light of day. By the end of 1975, after so many years of exhausting work and spent savings, Scholz had decided it was time to accept defeat, dismantle his studio, and sell his equipment. He then completed his planned final demo, almost as a formality, and suddenly everything changed. That demo was "More than a Feeling."

Scholz' inspired compositions, musical instinct as a multi-instrumentalist, and technical wizardry, complimented by Delp's stratospheric vocals, created a new sound that many other groups and their record labels tried to imitate. Following BOSTON's success, Scholz felt a new obligation as a role model, and has used BOSTON's popularity to promote education, empathy, and a healthy lifestyle. He has donated millions of dollars to organizations that fight animal cruelty, feed the homeless, and help children. Both Delp and guitarist Gary Pihl, a 30 year veteran of the band, also made substantial donations to these causes. Under his direction, the band's tours have raised money and awareness for numerous causes including National Hospice, Sierra Club, Shriner's Hospital for Children, Sea Shepherds, and AIDS relief.

Today BOSTON is recognized for the technical excellence of its live productions, the outstanding performance of its talented band members on stage, and their uncanny ability to reproduce all the unique sounds of their studio albums without the use of prerecorded material. For their 2016 "Four Decades Tour" BOSTON will delight their audiences with a high energy set of their well- known hits plus extended live arrangements, accompanied as always by their own unique visual stage presentation. The tour finale will feature a return to their first ever headline venue in the city of Boston at the Boston Music Hall, now known as the Wang Center.

Dates to be announced, check bandboston.com and facebook.com/bandboston for show dates as they are confirmed.