Now any of you who know me might think I've lost the last few marbles I had left, since I NEVER watch American Idol. In fact, the mere mention would start me on a rant over their stupid age rules that eliminate great singers, and all the glitz and needless hoopla you have to sit through just to watch someone cover a chopped down version of a pop song.

But now all that has changed. Last December I heard a young girl from Cape Cod singing Christmas songs for kids at a little event. I only knew her as a niece of friends of mine, but when I heard the voice, I was mesmerized by her ability to bring these simple songs to life.

Since then I discovered she had tried out for American Idol, and now, even in the early weeks of the competition, her name is becoming a household word, Siobhan Magnus. While her beautiful voice and vocal ability have been almost universally obvious to all, the fact that she is as real, down to earth, and sweet as she seems is known only to the few who have met her.

Siobhan has done all of this by herself starting from nothing, and no matter how far she gets in the competition, she has already earned herself a place in many people's hearts, and I doubt anyone deserves it more.

So I'm very nervous today, because tonight she sings again and I hope with all fingers crossed that things go well for her again.

Ms. Magnus, you've done the impossible, you've made me an AI fan. 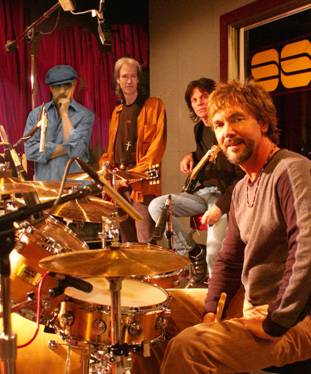 This two night event will be a very exciting time in rock history as it marks the group's first U.S. live shows.

The four Alliance members have all performed with rocker Sammy Hagar at different points in his career. Gary Pihl, on guitar, from '77 to '85 (since '85 with the band BOSTON), Robert Berry, on bass guitar, '96/'97 special shows, Alan Fitzgerald, keyboards, '76 to '79 (then played keys with Night Ranger) and David Lauser, on drums, who is currently in Sammy's band.

The Special Guest for the second half of the show will be Sammy's son, Aaron Hagar, singing songs from his father's career.

Alliance has had 3 CDs released in Europe (on Escape Records) and Japan (on Zero Records) to much critical acclaim, but have been so busy with their other bands that they haven't performed in the U.S. before now.

The Boston Rocks site on Yahoo.com commented, "We're pretty sure Sammy invited Alliance to make their first US appearance at his Beach Bar night club in St. Louis because he knew that they would put on fantastic, memorable shows.  After all, he hand picked all the members of Alliance at one time or another."  "And, the addition of Sammy’s son Aaron Hagar is just terrific," added a Gonna Hitch A Ride.com chat-room fan.

Sterling Whitaker and Jeb Wright feature an interview with Kimberley Dahme and Gary Pihl of Boston. You can check out the interview at blogtalkradio.

A man impersonating artist reps, last heard from in 2008 trying to run a scam on a charity organization by making a fake offer for Ronnie James Dio, may have resurfaced and is attempting to impersonate another artist rep.

If so, he may have picked the wrong guy this time – 20-year concert veteran Joe Fletcher, who is concentrating on films rather than music these days.

And this time, one of the artists being offered up for bookings is Boston founder Tom Scholz – who does not tour as a solo artist.

Fletcher, who resides in Carmel, Calif., learned someone was using his name and a "Joe Fletcher Presents" business Web site in an attempt to bilk businesses in Wisconsin, Illinois, New York and California.

"This person copied my info and is contacting clubs around the country trying to get them to send him money," Fletcher told Pollstar.

The contact information includes "business" addresses in Seattle, Chicago and New York City. And the offers are ridiculously low – $5,000 for Scholz plus a "full band" to play unusually small venues – and sometimes include a shakedown for another $3,000 for radio spot placement.

The impersonator has also been posting "help wanted" advertisements to Chicago’s Craigslist and other local bulletin boards and asking applicants to pay $50 to cover a "background check," Fletcher said.

BOSTON still alive and well in 2010

Work on another studio album is progressing at an agonizingly slow rate - like that would be news - but it is progressing. While I wouldn't want to give away too much about the album, it will contain both the very recognizable BOSTON sound plus some surprises I think everyone will appreciate - as long as you like Big Band Swing and Rap ... just kidding!

Writing, arranging and recording BOSTON music for hours day after day is frustrating, exhausting, and lonely, yet strangely enticing. My dad used to ask me, "If the song is 4 or 5 minutes long, why doesn't it take 4 or 5 minutes to record it?" The catch is, figuring out what should happen for every second of that 4 or 5 minutes for all the individual tracks on one song, and trying the hundreds of variations on each instrument or vocal takes me typically 4 or 5 months. For every measure of BOSTON music that survives the cut on an album, a week of work ends up in the trash bin.

Meanwhile, the rest of the band members are busy with their own lives and projects, and all have already contributed in some way to the new BOSTON album effort. These are understanding and patient people! Unfortunately I don't expect to have the album finished in time to prepare for a tour this summer, but we are all jonesing to play again.

Much more urgent and serious is Haiti. These poor people were living a wretchedly impoverished life before the earthquake, now it's worse than a Hollywood disaster movie come to life. Those that have survived the initial trauma now are faced with an almost impossible-to-survive situation. Even in this recession, seeing and hearing the stories from Haiti makes you realize how good we have it. Please dig a little deeper and donate as we have, through any of the numerous organizations mobilizing to help.

Let's all try to look out for each other!

On January 08, 2010, Michael Sweet and his fiance Lisa got married in a private ceremony with their families and closest friends. Congratulations Michael and Lisa!