From the Boston Herald: 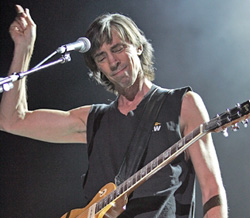 "Boy, was he talkative," said Barry, who had More Than A Feeling that he was going to devote his entire July 5 show on Oldies 103 to Tom's interview and Boston's playlist when he hung up from Scholz's call.

"But he was probably the most honest person I ever interviewed, and I've done 650 of these," he said.

Scott said after listening to Tom talk about Delp - Boston's former frontman who committed suicide in 2007 - he didn't think there was "any bad blood" between Tom and Brad.

"It was totally honest stuff that only a person could say who had best friends with him for 35 years," he said. "I think the rift was caused by other people. But I'm just the host. I let him talk and I didn't take a side."

In the interview teaser on Barry's lost45s.com Web site, Tom paid tribute to his old friend by saying Brad was "one of the best singers and probably one of the nicest people in rock 'n' roll history."

But it was the tease about lawsuits that fired up other members of the Boston family to contact Scott and give him an earful.

"I got royally screwed by everybody involved," Tom told Barry. "I made a lot of people rich with the work I had done."

Laughed Scott, "Oh, yes, I have heard from the wives."

Catch the full interview with Tom Scholz on "The Lost 45s with Barry Scott" on Oldies 103.3 Sunday from 7 p.m. to midnight.