The official Boston site has posted some updates on the front page.

Tom Scholz was recently interviewed for a PBS special "On Record: The Soundtrack of Our Lives", hosted by Sir George Martin, which is due to be broadcast in 2010. The documentary is an 8-hour special about the history of recorded music. The camera crew took many shots in Tom's studio Hideaway II.

Artist for The Simpsons gave each band member a BOSTONized Simpsons Cartoon with the following note:
To the members of Boston-

I grew up in Chelmsford, Mass, attended the Rhode Island School of Design, and landed the dream job of designing the Simpsons immediately following graduation in 1990. Boston has always by far been one of my favorite bands, and has literally helped me through 1000's of hours while sitting at the old drawing board over the years.

I had the privilege of meeting Brad Delp back in the spring of 2000 and many times after that through his band Beatlejuice. The last time I saw Brad, we discussed my doing a funny-cool Simpsons/Boston piece. He laughed and said, "Oh man, that'd be great - everybody in the band would love that." I hope you like it! It's the least I can do for all the great music over the years and I hope for many years to come! God bless you, your families and all your future endeavors!
Your Fan - Lance Wilder
and all the Boston Fans here on the Simpsons 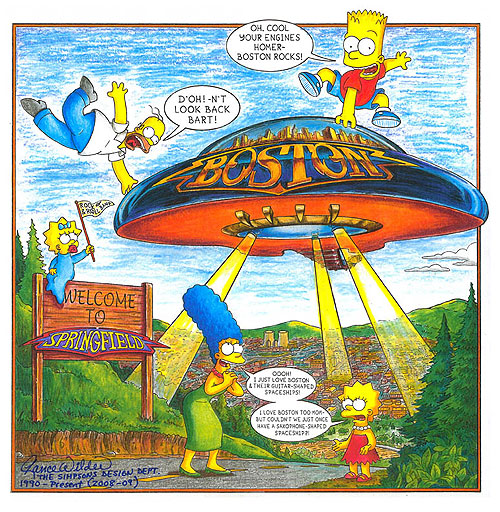 The site also mentions the release of the Greatest Hits Remaster, which has been previously reported here.

Also, as some are aware, Michael Sweet's wife Kyle has been battling ovarian cancer. I'm sure you will join me in wishing Kyle the strength to beat this cancer.