Sony had created this remaster without any involvement from Tom Scholz. After Tom discovered that Sony was releasing a remaster (and after hearing it) convinced Sony to allow him to remaster it from the original stereo analogue mix tapes. The original version of the remaster got released in Canada for a short time before being pulled from circulation. More information is available in the open letter Tom wrote in March 2006. 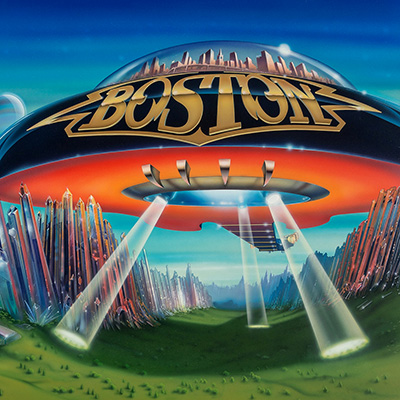 The Second Coming of Boston:
Look Back in Grandeur
By David Wild

When Boston touched down with their second album Don't Look Back in 1978, much was made by earthbound rock writers of the two years that had elapsed in-between the band's wildly successful first musical visitation and this new dawn arrivin'. In hindsight, a mere couple of years of hard labor turned out to be the virtual blink of an eye compared to some later, rather more extended breaks in Boston's recording action in the decades that have followed. If certain folks thought two years was such a long time to wait for the second coming of Boston, well, their patience was soon to be tried and tried again.

In any case, Don't Look Back turned out to be, by any fair standard, well worth the wait. If some folks at the time were ever so slightly disappointed, it may have been simply because it turns out that you really can't lose your virginity twice. True to Scholz's then-growing reputation as a mad scientist/guitar god, Don't Look Back seemed to be an impressive variation on the debut's successful formula - one that the M.I.T. grad had apparently whipped into shape in a basement lab in his off hours developing products for Polaroid. Reviewing the album for Rolling Stone, Ken Emerson astutely noted, "Don't Look Back isn't a departure from, but a consolidation of, the sound introduced on Boston's dazzling first album. Once again, mastermind Tom Scholz has marshaled a Mormon Tabernacle Choir of guitars, reworking almost imperceptibly his rich weave of ringing, acoustic tones, piercing electric notes and low-register but high-voltage riffs."

Overall, Don't Look Back offered its own high voltage mix of musical déjà vu and just enough of the shock of the new. Like the Boston album, Don't Look Back kicked off with a beautiful barnburner in the proud tradition  of Boston's classic "More Than a Feeling," followed by an instrumental bridge to another pop-rocking gem - this time, it was the searching "The Journey" into the joyously carefree "It's Easy," as opposed to Boston's "Foreplay" into "Long Time."

After this suitably rousing start, Don't Look Back takes an interesting and slightly darker turn. Whereas Boston had spoken almost mythically to the hearts and minds of teenagers with its sunny and celebratory spirit, "A Man I'll Never Be" was a slow-burning power ballad reflecting real grown-up concerns and lived-in reality. That said, by the end, it really rocks. In his Rolling Stone review, Emerson even compared the seven-minute song to another extended masterpiece, Led Zeppelin's "Stairway to Heaven" - as high as high praise gets in the realm of rock & roll.

Boston's high-flying vocalist Brad Delp contributed a similarly adult song to Don't Look Back in the form of the subtly fab-tastic "Used to Bad News" - another stunner that makes one wish we had heard more songs from Delp's pen over the years. This is not to say that it was all somber - in fact, Delp also co-wrote another song with Scholz here the more characteristically upbeat anthem "Party."

By some accounts, Scholz may have some mixed feelings regarding Don't Look Back - feeling rushed by the record company, he may have not finished the album to his own exceedingly high standards. In the end, the album went all the way to #1 on the Billboard album charts - something even Boston didn't accomplish - though it ultimately sold fewer millions of copies. Considering that Boston remains one of the most popular albums of all-time, that remains an impossible standard.

Still, for assorted legal and creative reasons, this would be the last new Boston studio album for Epic Records, and the last album Boston would release at all for another eight years, by which time guitarist Barry Goudreau, drummer Sub Hashian and bassist Fran Sheehan were no longer in the lineup. And while I am not a musical genius like Tom Scholz, let me say that more than a quarter century later, Don't Look Back still sounds damn good to my ears - a sonic blast from the past that leaves me feelin' satisfied. An album this good is never really, to borrow a phrase from "Don't Look Back" itself, far away and left behind.

One technical note for the detail-oriented; as a young Boston fan growing up in New Jersey, I remember studying the Don't Look Back album cover and sleeve notes closely and somehow being impressed that despite the truly state of the art sound, Boston made a point of letting the listener know that there were "no synthesizers used" and "no computers used." Taking a cue from this proclamation, I think it only right that I let the world know that although I did use a computer, absolutely no synthesizers were used in writing these liner notes.

No synthesizers used
No computers used

All songs recorded and mixed at Tom Scholz' Hideaway Studio, except piano on "A Man I'll Never Be" recorded at Northern Studio, Maynard, Mass., and engineered by Dave Butler

Special thanks to Cindy whose unfailing support made this album possible, to John Boylan and Putney for their expert advice, to everyone who helped assemble and bail out the Hideaway Studio, and to everyone at Epic for being so patient.

What Are You Going to Listen to Next?

For a complete listing of titles available from Legacy Recordings, please visit us at:
www.legacyrecordings.com
www.sonybmg.com