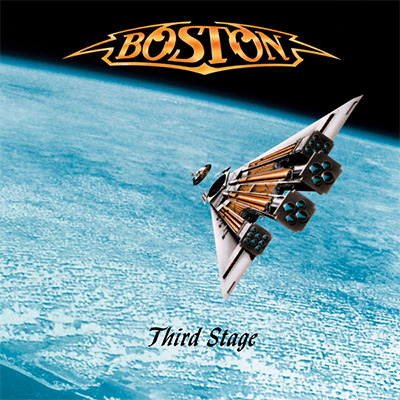 
Amanda
1980-81
Amanda was the first.  The first song on the album.  The first written.  The ringing chime notes are played on electric guitar, like the church bells at the end of "We're Ready."

The Launch
1982
Remove the breakable objects from tables and shelves before listening.  The countdown prepares you for ignition of the world's largest organ-powered vehicle.  The ascent is followed until the Third Stage separates and accelerates into...

My Destination
1982
A variation on the theme of "Amanda" played on an old Wurlitzer electric piano, just like the old days.  Brad, signing at his best, answers the inevitable question of the Third Stage.

A New World
1982, 85
No those aren't violins; they're electric guitars through a Rockman

I Think I Like It
1985-86
Changes really open your eyes.  Rewrite of a rocker by John English composed over 13 years ago.


Tom, Brad and others with Boston are vegetarians.  If you would like information about changing to a vegetarian diet write to:


Boston commends the work done by several organizations in protecting life.  You can help by contacting the following organizations, or by simply not purchasing a fur coat.

For The Technically Curious,
or
How to make a record in just Six Years

This was an unusual recording project.  How many studios could you walk into and find the guitarist punching the tape deck controls with his right foot while blasting power chords out of an amplifier the size of a peanut butter sandwich? How many projects could you listen in 1980, '81, '83, '84, '85, and find someone still working on the same song?


It's been a Long Time

Time to record an album is usually measured in months.  After the first two or three years, I began to lose perspective of the months and I discovered other ways to measure progress; one hundred and seventy-five light bulbs burned out in the studio before I did.  The record button was pushed nearly one-million times-that's nearly a million chances to accidentally erase something.  Over one hundred reels of tape were filled with music.  Brad produced over 300 P-pops, and I lost my pick at least a thousand times.

"Third Stage" is an all-analog recording.  To minimize tape wear, the basics were usually recorded on one 24-track tape then the vocals and leads on another.  When it came time to synchronize the two tape decks for playback, the high-tech robot synchronizer turned out to be a lemon.  It's replacement was a human engineer with long arms; sitting for hours between two M-79, 24 tracks, alternately pressing a thumb on the appropriate reel to keep the decks running at exactly the same speed.

Did you know that when some recording tape sits for a long time, it gets sticky?  Neither did I.  How would you feel if you took out your four-year old, one of a kind mix of "Cool The Engines," (with no safety copy) and halfway through the song, the reels stop dead with a bang because your tape has become glued to the guides and must be peeled off the playback head like adhesive tape.  The fix: spread a suspicious looking silicon concoction onto the tape as it runs by, and try not to let the enormous beads of sweat dripping from your forehead get your capstan rusty.

That's right!  Honest!  And no violins either (so how do you make thunderstorms without a synthesizer?  A twenty-year old Vox Tone-Bender with a bad transistor).  In other words, the Boston sound is powered by old, straight ahead rock-n-roll equipment, as opposed to midi-interconnected-computer-sequenced synthesizers. There is however, a notable exception.  The Rockman, it's not old-the ink is still wet on the patents.  This little box replaced the 100-watt stacks, Soaks, and racks of old equipment that was used to make the Boston guitar sound.  The Rockman was developed and refined over the course of the project, and ended up on the majority of the tracks.  Here's a partial list of the musical equipment used:

A real Steinway (Thanks Blue Jay)

Custom prom-stored drums (thanks Neil, Digi drums) used on a couple of cuts

To Bob Ludwig of Master Disk for mastering par excellence and working for hours to save a few milliseconds, to Chris Serra cover ship concept sleeve for drawing and John Salozzo cover final art, to Neil Miller Augustine Antoine Bill Mack Mike Blackmore Gary Pihl Digi Drums and Del Eilers for technical help with the studio, to Blue Jay Studios where the piano track for "Can'tcha Say" was recorded and engineered by Gragg Lumsford, to Ron Pownall for Organ Pipe stage studio and to Richard Ocean for lighting it, to the MCA staff for being patient and energetic, to everyone at SR&D for making the Rockman a reality, and to Michelle Scholz for the "World."


Credit Where Credit Is Due

To Cindy who was there to pick me up when I fell down for all six years, who did all the thankless jobs without being asked, and told me when I was doing something stupid, even when I really was.  The album would not have been finished without her.

Jeff Dorenfeld for mopping up the mess, and sticking with me through five years of hope, dismay, anticipation, anger, jubilation and fear.  Without his level-headed guidance this album would never have seen the light of day.

Brad Delp for signing the way only he can sing. This album would not have sounded the same without him.

Don Engel for saving us from the clutches of those who loved money far more than music.

Chric Serra for creating a Third Stage for the cover suitable for launching.

Gary Pihl who came in off the bench at the last minute to put in the winning shot.

Jim Masdea for making a comeback and for playing humanoid synchronized cymbals.

Kevin Hartford for being my friend through six hard years.

To several million listeners who've been waiting for a long time.

Babe, tomorrow's so far away
There's something I just have to say
I don't think I can hide what I'm feelin' inside
Another day, knowin' I love you

And I-I'm getting too close again
I don't want to see it end
If I tell you tonight
Will you turn out the light
And walk away knowin' I love you?

And, I feel like today's the day
I'm lookin' for the words to say
Do you wanna be free, are you ready for me
To feel this way?
I don't wanna lose you

So, it may be too soon I know
The feeling takes so long to grow
If I tell you today will you turn me away
And let me go?
I don't wanna lose you

And, feelin' the way I do
I don't wanna wait my whole life through
To say I'm in love with you

We're ready!
C'mon
We can find a way

We can find a way

I'm no fool, gonna keep it cool
Take it day by day
We won't know where we might go
'Till we take it all the way

And now we're on our way
No need to hurry just to get from day to day
And I, oooh, I know
We don't have to run that hard to get where we can go

Cool the engines down

Cool the engines down

And I
I've taken so long, I know
Never had so far to go
It's not where you can be, it's what you can see
That takes you there
Your destination

We can be blind, but a man tries to see
It takes tenderness
For a man to be what he can be
And what does it mean
If you're weak or strong?
A gentle feelin'
can make it right or make it wrong
What does it take to be a man?

Somethin' changin' for me inside
Took a long time
Now there's nothin' for me to hide
I say what's on my mind
Changes, makin' me see the light
I finally see wrong from right
Now I can see every sign

Oh doesn't love say enough
When you realize?
People try to come on so tough
All to fantasize
Changes takin' me through the night
I finally see the light
I've opened my eyes
Those changes can open you eyes


Can'tcha Say (You Believe in Me) / Still in Love

Can'tcha say you believe in me?
Can'tcha see what you mean to me?

Oooh, the nights you came to me
A bluejean lady so eager to be free
And the wind in your long hair blowin' as we stood for the band

Chorus:
Hollyann
We made the dark into light
We saw the wrong and the right
We were for life
And we would never concede it

Hollyann
We left the world behind
A million hands gave the sign
We held the line
Can you believe it?
Hollyann