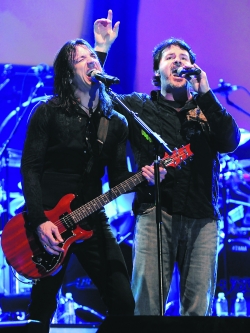 Michael Sweet, left, and Tommy DeCarlo of Boston brought their classic rock sound to Rock Fest Thursday. Staff photo by Dan Reiland
As if they were crusaders for 1980s arena rock, Boston and Poison cranked out timeless hits on foggy Thursday night at Rock Fest in Cadott, as part of a lineup that gets progressively more modern as the weekend rolls on.

Boston headlined the evening from what looked like the cockpit of the interstellar ship on the cover of their debut album, giving fans all the classics from an intriguing stage setup.

The 90-minute set opened with the patriotic "Star Spangled Banner" rock 'n'roll style, before heading into a slew of fan favorites, including "Rock N' Roll Band," "Piece of Mind" and "Cool The Engines."

DeCarlo respectfully played his roll as the rookie member of the band, filling in vocals for late singer Brad Delp.

The East Coast rockers carried on the hit parade with "Don't Look Back," "Amanda" and surprisingly early in the show, "More Than a Feeling."

The set was spotless, except for a possible mixed up harmonization that resulted in an uncomfortable sounding first part of the "More Than a Feeling" solo.

The fog nearly blanked out the grounds and the crowd dissipated during a seemingly extended version of "Foreplay," but Boston continued to kick out the jams and capped regulation with "Long Time."

Toward the end the set dragged on a bit, but like it or not, fine musicianship was in no short order.

Almost as tribute to Delp, Boston sent the remaining, dancing fans to their campsites with "Smokin,'" a song written 30 years ago - likely, a long time before many of the seemingly young crowd was born.

Iconic party rockers Poison fit the bill perfectly as the opening act to the weekend's festivities.

Poison kicked off the set with "Look What the Cat Dragged In" and "I Want Action," before rattling through a sing-along cover in "That's What I Like About You."

The show was made by guitarist C.C. DeVille's typical '80s shred on his tricked out flying V, and he brought the audience to finger-tapping heaven with a huge solo before the band played "Something to Believe In."

Michaels apparently has never heard the phrase "Less talk, more rock," and babbled on for much of the show.

But, it seemed heartfelt and Poison got the best reactions of the night with "Every Rose Has It's Thorn," "Unskinny Bop" and of course, "Talk Dirty To Me."