The following was posted to BOSTON's Facebook page January 19, 2020:

Being inducted into the NAMM TECnology Hall of Fame is a huge thrill for me as an engineer/musician. This brings back many memories of the struggle to invent, design, and build the first fully-functional ROCKMAN prototype which led up to the incredible experience of debuting it at the ’82 summer NAMM show in Atlanta.

In 1982 there was no way to practice high-power rock guitar quietly. Even though I had already designed the Power Soak attenuator, it was still too loud to plug your Les Paul into a Marshall stack in the middle of the night, unless you lived alone and a long way from your nearest neighbor. Besides, it just wasn’t the same listening to your power chords at living room volume. What I needed was a way to get that maxed-out overdrive sound in headphones – and not that turned-down amp-in-your-bedroom sound, but huge, total immersion stereo sound that you get on stage with everything on 10. (There was no 11 yet!) And it had to be portable enough to travel without a truck!

After some lame attempts at plugging headphones into an amp output through an attenuator, and even wiring up some simple filters, I realized this problem was going to take a lot more engineering effort. Having spent the last ten years learning how to create guitar sounds with analog electronic equipment, and seven years before that having a wealth of engineering know-how crammed into my head at MIT and Polaroid, I knew that this was a challenge I could tackle. However, making it fit into a Les Paul guitar case (this is where the “peanut butter sandwich” size requirement came from) and doing it for a price that wouldn’t necessitate hocking your guitar were not so obviously attainable goals.

First step was to draw up a block diagram with all the analog pieces needed to get state-of-the-art sustain and distortion, surrounding stereo doubled image, and stereo echo plus reverb. The unique way these processing circuits were combined led to the patents for what I would call the ROCKMAN, a portable device that would convince your ears you were performing in an arena. Moving from this diagram and a few sketches to an actual working model took a small crowd of talented people in addition to myself, a lot of money I didn’t expect to see again, and a little over a year of hard work, stress, inspiration, and abject failure. It seemed impossible that we would make our deadline for the NAMM show, but after all-nighters by a dedicated team and badly-frazzled nerves, at the last minute the first prototype was ready. It still had a lot of unresolved circuit issues so I would have to be very careful about what I played and how I played it.
Summer NAMM 1982

The tiny little jewel of a black box sat alone on a pedestal, diminutive, in the middle of an empty 20-foot booth with a backdrop formed by the word ROCKMAN in giant concrete letters. OK, they were painted styrofoam, but they looked real. This was summer NAMM. Back then that was the BIG NAMM show, and we were surrounded by all the glamour, glitz, and the overwhelming products of the giant corporations’ displays. Here we were playing amongst the big dogs with nothing but me, a guitar, and a tiny box no one had ever seen. What was I thinking? Had I lost my mind? – I had of course, but it had happened long ago. Next to the box sat just two pairs of headphones, one for me with my Les Paul, and one for whoever wanted to hear what the box did. That’s right, it was just one at a time. I would play for a couple of minutes and one person could listen – I wasn’t really expecting a crowd. I was wrong.

The first curious by-stander put the headphones on and I played a few power chords. His eyes got really big. He looked around, like, where are the amp stacks hiding? Then tore the headphones off. He was greeted with total silence, except for the milling early morning attendees and the little plinkity-plink sounds of a Les Paul with no amplifier. After a couple of times with the headphones off, then back on, he finally came to believe that the sounds he heard really were all in his head, compliments of the ROCKMAN, and not in the room. This guy immediately grabbed a few people he knew to drag them over to hear the box, other people noticed the commotion and wanted a turn with the headphones. My coffee was still sitting on the pedestal untouched by midmorning, and the line to hear the ROCKMAN stretched all the way down the length of the walkway past all the other booths and out of sight. My demo performance was shortened to only about a minute, but there was no keeping up with the line of interested parties. I think every buyer at NAMM who heard it ordered it, and a lot of buyers just ordered without listening to it because they didn’t want to be left out. Now I faced a new problem, hundreds of orders for a device that was not even close to production!

After seemingly endless design changes and production holdups, the first production ROCKMEN were successfully delivered. I got amazing contacts from performers I admired that I never thought I would meet. Among them, Joe Walsh (a true master of rock guitar sound) who called to tell me the ROCKMAN was “way cool,” Todd Rundgren who sent a pic of his new pedal board which consisted of four ROCKMEN that he could switch between, Billy Gibbons who generously described its sound as “tone with a capital T” (and who knows guitar tone better than Billy?), Phil Collen, Joe Satriani, Elliot Easton, and many others. But my most prized compliment from ROCKMAN owners came from Jeff Beck, in the form of two warranty cards bearing his name.

The ROCKMAN headphone amp eventually inspired a whole line of grown-up fully adjustable stage amplifiers which BOSTON has used exclusively since the mid ‘80s and made it possible to finally faithfully reproduce all of the recorded BOSTON hits live on stage. Although this was my baby from the beginning, none of it would have seen the light of day without contributions from several talented people including:

Neil Miller (MIT) who was chief circuit design engineer (his initial are on the original circuit board),
Ken Keisel (MIT and Polaroid) who built up the first stereo “dubler” to my specs, which was used on all BOSTON albums and in every ROCKMAN,
Bill Clack (Princeton) who solved an impossible problem with ROCKMAN’s preamp compressor that had everyone else baffled,
Cindy Scholz, (my wife at that time) who did the ROCKMAN graphic art design, and
Bob Stephansky (Polaroid Designer) who did the detailed mechanical drawings.

Some of these people are no longer with us; all of them were my friends and share the bond of the celebrations and trials bringing the ROCKMAN to life. 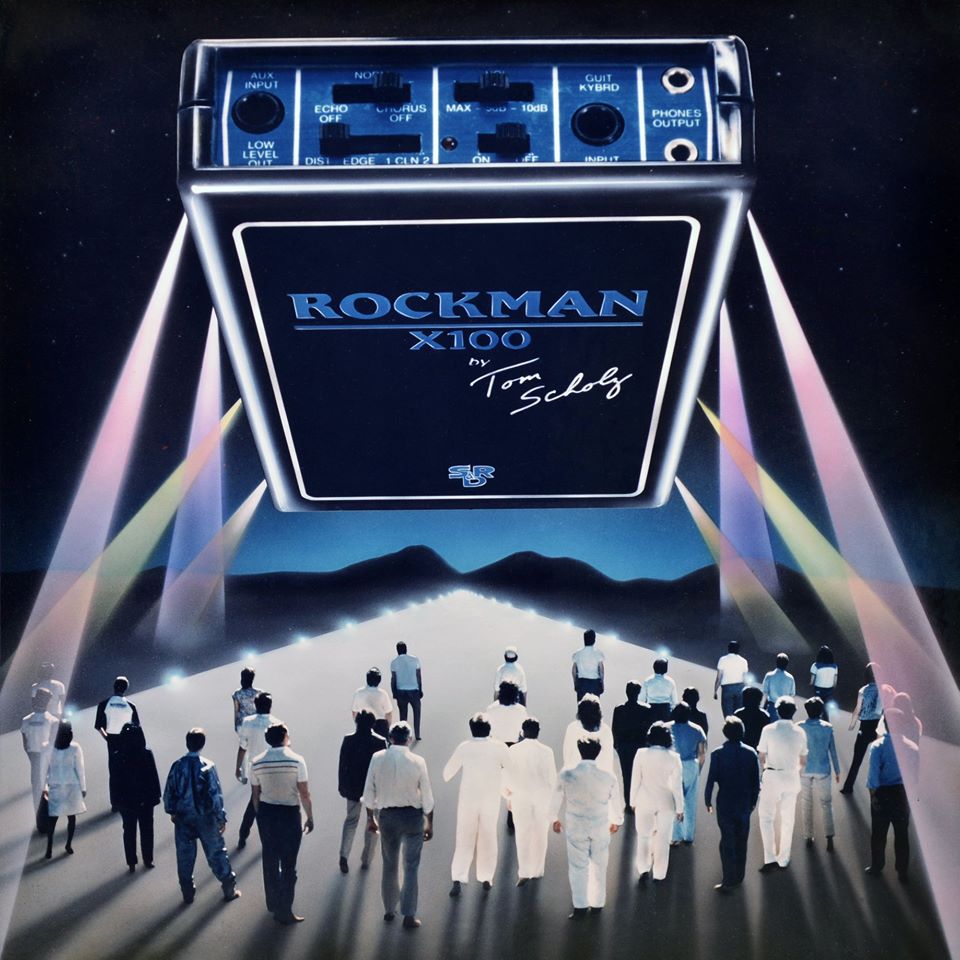