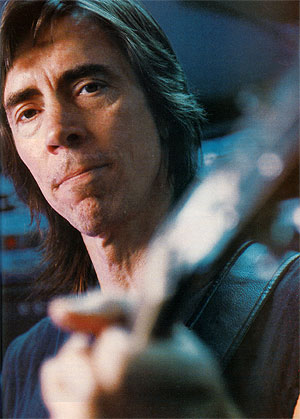 Tom Scholz likes to do things his way. As the guitarist and figurehead of arena-rock pioneers Boston, he'll lay down hundreds of tracks to get a song the way he wants it, and if he can't find a processor to shape a sound properly, he'll build one of his own. When he is forced to compromise -- to cut two-track masters in digital, for instance, -- he does so grudgingly. "It finally became a bad idea to mix anything down to a two-track analog tape." he says, "because nothing is available to the consumer that has not been digitized."

Any why does he dislike digital? "It sounds like crap," he says, laughing. "You want a more technical discussion?"

Scholz may be a nonconformist, but he is a successful one. In the Seventies, as the guitarist and leader of Boston, he cut the group's demos in his basement using recording equipment he built by himself. The effort landed the band a record deal in 1976 that spawned Boston's multi-Platinum self-titled debit and its hit singles. "Long Time," "Peace of Mind" and "More Than a Feeling." In the Eighties Scholz invented the Rockman, a revolutionary headphone-equipped personal amplifier that was the precursor to Korg's Pandora, the Line 6 POD and numerous other modern digital wonders.

Yet with the release of Corporate America, Boston's fifth full album in 26 years, the group seems more like a real band than ever. True, Scholz still does the lion's share of writing and recording, and is the only instrumentalist to be heard on four of the album's 10 tracks. But Corporate America is the most collaborative effort Boston -- which currently comprises Scholz, Delp, singer Fran Cosmo, singer/guitarist Kimberly Dahme, guitarist Anthony Cosmo and multi-instrumentalist Gary Pihl -- has ever released.

"This is the first Boston album to have complete songs by other people," says Scholz. "Anthony wrote three of the cuts and Kimberly wrote one."

It's also the first Boston album to take a stand politically. And for Scholz, that's the biggest change of all.

GUITAR WORLD A vast majority of the songs here are love songs, yet you titled the album Corporate America. That's seems to suggest a priority.

TOM SCHOLZ It absolutely does. [pauses] You're looking for more than one-word answers, huh? [laughs]

"Corporate America" was a very important song. To me, it was the most important thing on the CD. It's a simple as that. Actually, we didn't know whether it would fit in or not with Boston and a Boston CD. In fact, we originally put the song on the 'net under the name "Downer's Revenge," and "Corporate America" is now No. 1 on the progressive charts on mp3.com.

So as we got more and more experience with the song, we realized that Boston audiences have a lot broader musical taste and are quite open-minded. So we eventually decided to include the original version of "Corporate America" on the Boston CD. 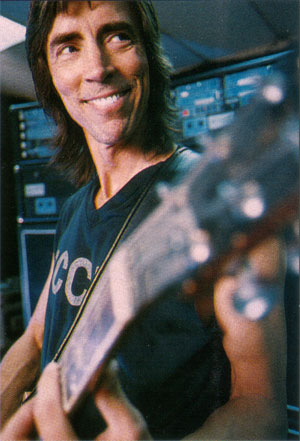 Like other artists, in the past you've made reference to your political and social beliefs in album notes. Was it harder to set such things to music?

After the financial shenanigans of Enron, WorldCom and all, people started to pay attention to corporate America. But frankly, those things -- the fact that powerful executives were stealing people's money -- are really small potatoes compared to other things they've done. But maybe it took hitting people in their pocketbooks to make them realize, You know what/ These people don’t have our best interests at stake.

You mention working very hard on that song, which is impressive since you’re not exactly known as a fast worker.

[laughs] That is the understatement of the century.

How long did this album take to complete?

It took four and a half years. They've all taken four or five years. It's about the same.

What's interesting is that, even though there's a lot going on in these songs, the music doesn't seem as baroque as one the first and third albums.

I was trying to get a little more basic with things. I want people to hear the chords and to listen to the words that are going over them, as opposed to fancy guitar licks. To he, that focus on flash is really a Seventies/Eighties thing, when everybody had to do something fancy instrumentally that made them seem cool. I was trying to pay more attention to the feeling of the song. I was going to say the "vibe" of the song, but I don't want to date myself. [laughs]

The feel may be different, but the basic Boston sound is still there.

I'd like to think I was doing something new back then. Obviously, I had very strong classical music roots, and the impact of that ran through an awful lot of the material that was on those early albums, right through Third Stage. That's what I was focused on -- I was trying to get the power and emotion of classical music into rock and roll. But, you know, I did that. Now I still listen to classical music, but I would like to think that I'm getting more emotion into the songs now having less concern about their musical content.

The Rockman seems to have inspired an entire industry. Certainly, it would be hard to imagine the POD or the Pandora having existed had the Rockman not gone first.

Actually, I use both. I'll play some parts through an old, ancient Marshall head I like, running through and old Power Soak that I made 25 years ago [one of Scholz's first creations, the Power Soak allowed guitarists to turn up their amps for maximum distortion while maintaining very low output volumes -- GW Ed.]. And some of itI will play using nothing more than a Rockman headphone amp. To be honest with you. I still prefer basic Rockman sounds for a lot of the work I do on the CDs, and I use it exclusively live. Now it's harder, because I have to make sure I take care of the stuff I have, because you can't buy it anymore. [laughs]

You know, it was fun doing the design work, and it was fun developing it. As a matter of fact, it was a great kick when people who could buy anything would tell me that they own one. But to be honest with you, I hated being in business, and I was very bad at it. And when it started to become more of a business and less of an outlet for my ideas, I totally lost interest. I still am going to develop some ideas that I have, but my only interest is in doing it and seeing if it works, and doing a prototype for myself. If somebody else wants one, maybe I can get a couple more made. Right now, I'm working on a new kind of ice skate.

Freestyle skates are the most ridiculously antiquated things imaginable. They're still using these stupid riding boots with a piece of steel stuck on the bottom. They haven't changed in 60 years, but I think I have a very good way to attach a blade to a person's foot and enable them to use it. That's my project at the moment.