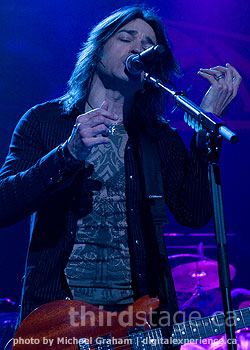 Stryper frontman and accomplished solo artist Michael Sweet announced his departure from legendary rock band BOSTON today, in order to devote his full attention to his longstanding role as the lead vocalist and lead guitarist for multi-platinum rock outfit Stryper – a band he co-founded in 1983. Sweet joined BOSTON in 2008, sharing lead vocals and playing guitar on a headlining tour of North America, performing the band's classic hits like "More than a Feeling," "Peace of Mind," "Amanda" and "Don't Look Back."

Following the BOSTON tour, Stryper released the 2009 studio album "Murder by Pride" (featuring a cover of BOSTON’s "Peace of Mind"), which led to a yearlong world tour with all of the original members. In 2010, Stryper released "The Covering," and another world tour recently concluded. Stryper is currently in the studio working on an untitled release for 2011, with tour dates already announced for this fall.

"My focus and my loyalty lies with Stryper, the band that I've committed almost thirty years of my life to," says Sweet. "The guys in Stryper are my brothers and I’m excited about our future together. The music of BOSTON helped shape who I am as an artist, and the opportunity to be a part of their musical legacy is overwhelming. It’s been an honor to share the stage with them, and a bigger honor to call them my friends."

In addition to the increasing demands for Stryper, Sweet has been spending some of his time off the road in Nashville, writing with A-list songwriters such as Blair Daly (Rascal Flatts, Uncle Kracker, Lynyrd Skynyrd), Luke Laird (Carrie Underwood, Blake Shelton, Tim McGraw), Britton Cameron (Steel Magnolia, Lonestar, Eden's Edge) and others.

"I’ve always loved the writing process and to be able to collaborate with some of the greatest writers in Nashville is an absolutely amazing experience for me," explains Sweet. "I’m looking forward to many more successful trips to Music City."

Stryper has sold more than 8 million albums worldwide. The group’s unprecedented 1986 album "To Hell with the Devil" went double-platinum and was named one of the "100 Greatest Albums in Christian Music" by CCM Magazine.